One of the OIE’s chief mandates is to ensure the transparency of the world animal health situation. To meet this objective, the OIE collects official notifications of animal diseases from its Member Countries, including notifications involving zoonoses (animal diseases transmissible to humans) and disseminates this information to the international community.

To this end, Member Countries have authorised the OIE Headquarters to contact their national Delegate directly whenever health information is reported in the media or other non-official sources that could involve an event legally requiring immediate notification to the OIE).

The active search procedure applied by the OIE is as follows:

The information does not become official until it has been confirmed by the Delegate. Indeed, the OIE considers that the procedure for validating the information with the national Veterinary Authorities to be indispensable in order to obtain official confirmation via standard report forms and is a precondition for it to be officially disseminated.

Invalidation of rumours and non-official information about an event or a final diagnosis that differs from the one originally suspected can provide value-added knowledge and help to improve risk analysis.

Following the launch of this active search activity for rumours and non-official information in January 2002, the number of immediate notifications published increased, thereby fulfilling the primary objective in setting up this activity, namely helping to improve the OIE Early Warning System. Thereafter, the number of enquiries sent to countries gradually stabilised before decreasing slightly. This attests to both a better understanding of the reasons for notifying exceptional events and a greater transparency on the part of the countries concerned. It can also be linked to a decline in the number of notifications of avian influenza in the world and a worldwide sanitary situation that is globally more stable in animals than it was during the peak of the avian influenza crisis. 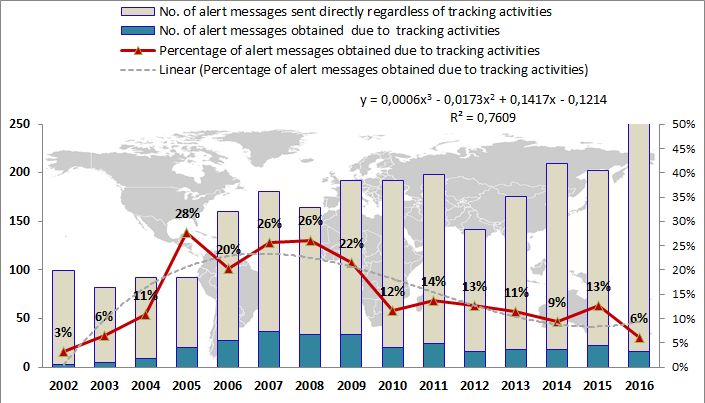 Active search activities have not been restricted to exceptional events but have also taken into account information from OIE-Listed diseases or zoonosis in humans, these latters being verified upon receipt of the relevant six-monthly  or annual report. In 2008, this diversification of active search activity increased a lot compared to previous years.  The following graph displays the global growth of non-official information active search activities since 2002 and its diversification in 2008 towards the verification of notification of health information related to OIE-Listed diseases that have to be notified in the six-monthly reports and zoonosis in humans that have to be reported in annual reports.

Graph 2 – Distribution of active search and verification activities since 2002

To strengthen existing early warning systems, the OIE is working with the Food and Agriculture Organization of the United Nations (FAO) and the World Health Organization (WHO) to develop the Global Early Warning and Response System (GLEWS). Its primary objective is to share health information, and especially that derived from disease tracking. Information on 25 priority diseases (19 zoonoses and 6 strictly animal diseases) is disseminated within the GLEWS network comprising these three organisations which combine their respective active search mechanisms and verification networks, in line with their mandates, for the information thus indentified and share the results of verification.

This collaboration between the three international organisations within the framework of GLEWS has lead to the use of a joint platform for sharing non-official information and the results of verification, and analytical tools to predict the appearance and spread of diseases, and, where appropriate to a coordinated response by each of the three organisations in the event of health emergencies.