At the occasion of the 86th General Session of the OIE, the 181 OIE Member Countries discussed several revisions of OIE international Standards and guidelines resulting in a stronger veterinary supervision of the use of antimicrobials in animals worldwide. Definitions of veterinary medical and non veterinary medical use were adopted today, as well as a definition of growth promotion use. Guidance for surveillance national systems was also on the agenda of OIE Delegates, as well as the revision of the OIE list of antimicrobial agents of veterinary importance with new recommendations regarding phasing out use for growth promotion. 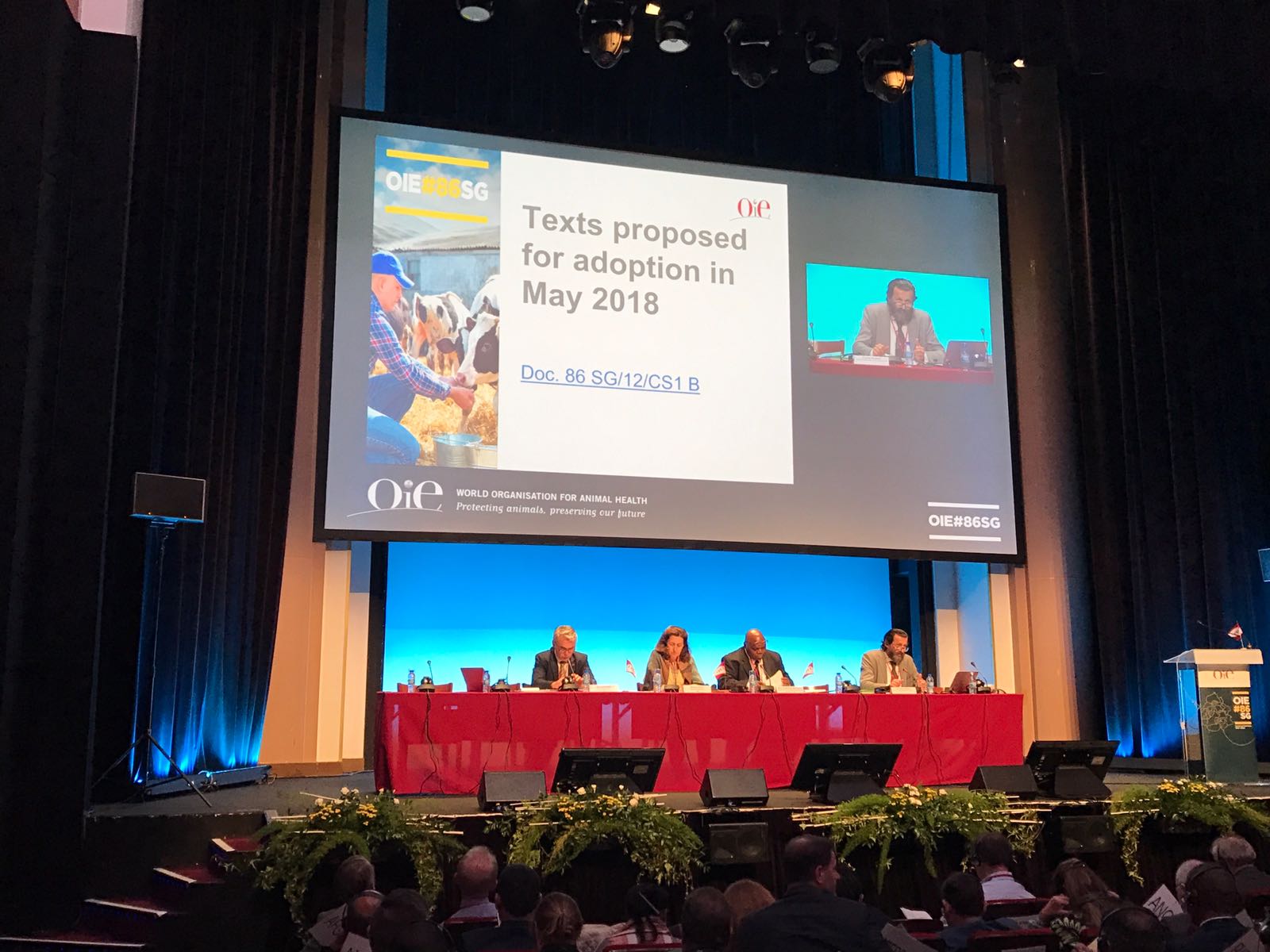 Paris, 25 May 2018 – Antimicrobial resistance is a global human and animal health concern that is influenced by both human and non-human antimicrobial usage. Antimicrobials being essential drugs for human and animal health and welfare, the spread of resistance endangers modern human and veterinary medicines as we know them. The human, animal and plant sectors consequently have a shared responsibility to preserve their efficiency.
The OIE and its 181 Members Countries have built over 10 years a comprehensive set of International Standards and guidelines, providing a framework for responsible and prudent use of antimicrobial products in animals and for the surveillance and monitoring for antimicrobial resistance and the quantities of antimicrobials used. The discussion held during this week at the General Session resulted in three main updates and adaptations of these Standards.

These definitions differentiate veterinary medical use and non veterinary medical use, the latter including growth promotion. According to the new version of OIE international Standards adopted, chapter Article 6.8.1.-bis of the Terrestrial Code (soon available on www.woah.org/amrstandards), veterinary medical use means the administration of an antimicrobial agent to an individual or a group of animals to treat, control or prevent infectious disease.

Each of the terms ‘treat‘, ‘control‘ and ‘prevent‘ were also clearly defined:

Associated with the already existing OIE international Standards on responsible and prudent use of antimicrobials agents in animals (see www.woah.org/amrstandards), these new texts adopted will be a powerful asset for national Veterinary Services to advocate for adaptation of national legislation, and the reinforcement of veterinary supervision of the use of antimicrobials in animals. Well trained and well supervised by the statutory veterinary bodies, veterinarians are an essential part of the solution to fight antimicrobials resistance.

Another topic considered as a priority by the Tripartite is phasing out the use of the most precious antimicrobials for human health as growth promoters in livestock agricultural systems. In 2017, 60 OIE Member Countries were still reporting use of antimicrobials for growth promotion, either with direct authorisation of some compounds, or because the country had no regulatory framework on this issue.

Finally, revisions of the OIE international Standards on the harmonisation of national antimicrobial resistance surveillance and monitoring programmes (Chapter 6.7 of the Terrestrial Code, soon available on www.woah.org/amrstandards) were confirmed as adopted today. Recognising that surveillance for antimicrobial resistance is a significant technical challenge for Member Countries, these revisions provide them detailed scientific guidance for their surveillance national systems.

Despite the progress made in the fight against AMR in all sectors, notably since the adoption in 2015 of the Global Action Plan on AMR and its uptake through over 100 national actions plans around the world, significant challenges remain. The revision of OIE international Standards that took place this week at the 86th OIE General Session are a positive sign of the importance that the animal health international community ascribes to this issue, and the leadership of the OIE and its Members in this issue for the veterinary sector. Discussions will continue to plan the next steps of the fight and support countries in their implementation of OIE international Standards, notably at the 2nd OIE Global Conference on antimicrobial resistance, to be held in Marrakech, Maroc, from the 29th to the 30th of October 2018, as well as through permanent partnership with FAO and WHO within the Tripartite Collaboration.