WHO, OIE, FAO and GARC call to invest in defeating human rabies transmitted by dogs

Leading organizations in the field of rabies, WHO, OIE, FAO, together with GARC, are urging countries to develop appropriate investment strategies to eliminate human rabies. The disease is mainly transmitted to humans through the bite of an infected dog and is widespread in low-income countries, with little or no domestic and stray dog management or vaccination programmes.

Pilot programmes have successfully demonstrated that elimination of rabies is achievable mainly through mass dog-vaccination campaigns, supported by improved access to post-exposure prophylaxis (post-bite treatment) to people immediately after a suspected dog-bite. Over 95% of human cases of rabies are due to dog bites and, unlike many other diseases, the tools required to tackle this neglected disease are available.

Paris, 28 September 2015 –“Rabies is preventable at source by vaccinating dogs” says Dr. Bernadette Abela-Ridder, of the Neglected Zoonotic Diseases unit of the WHO Department of Control of Neglected Tropical Diseases.“ Decline in human rabies deaths closely mirrors that of rabies in dogs and investments are needed now to roll out elimination programmes in affected communities and countries.”

On World Rabies Day today, the World Health Organization (WHO), The Food and Agriculture Organization of the United Nations (FAO) and the World Organisation for Animal Health (OIE) in collaboration with the Global Alliance for Rabies Control (GARC) have published a Rationale for investing in the global elimination of dog-mediated human rabies which calls on countries to invest in cost-effective and sustainable control programmes, particularly in the mass vaccination of dogs.

Rabies, a major public health problem affecting mainly the rural poor and marginalised populations, continues to kill tens of thousands of people every year. Almost 40% of victims exposed to dog-bites are children under the age of 15. 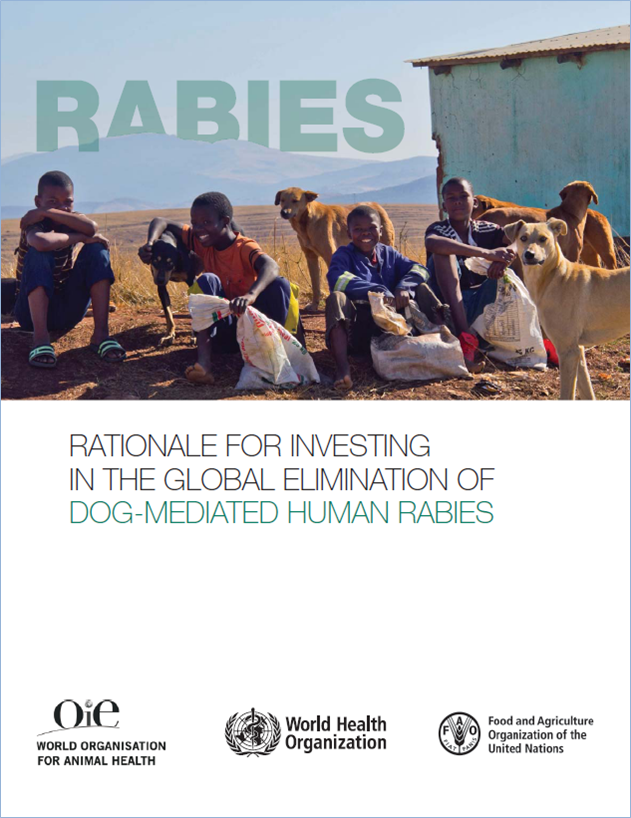 Post-exposure prophylaxis (PEP – treatment immediately applied after an animal bite) can be effective in preventing human rabies deaths. However the approach is costly and can only protect individuals who have prompt access to select health facilities that provide the treatment. Mass vaccination of dogs is proven to be the most cost-effective means of preventing human rabies deaths and eliminating its transmission.

Rationale for investing in the global elimination of dog-mediated human rabies makes the case that global freedom from dog-mediated human rabies is feasible. Investment is needed to involve communities and strengthen local initiatives in training people and volunteers carry out coordinated dog-vaccination campaigns to enable geographical and wider dog population coverage in endemic countries.

Investment is also needed to support and sustain control programmes at national and regional levels. For example, setting up regional rabies vaccine banks can support countries in their control efforts. Initially set up in Asia, the OIE regional rabies vaccines banks, established further to international competitive tenders, are now also used by the WHO to procure high quality rabies vaccines, manufactured in accordance with the standards developed by the OIE, for dog vaccination in Southern Africa and the Philippines.

A recent WHO-led pilot project in the Philippines, South Africa, the United Republic of Tanzania has demonstrated that mass vaccination of dogs can drastically reduce and eliminate human rabies deaths. 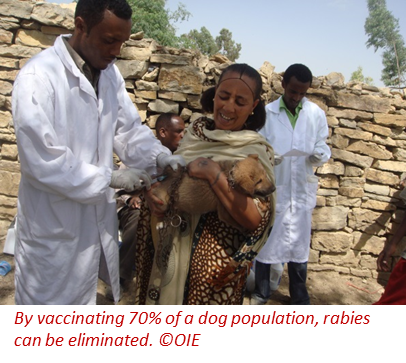 Rationale for investing in the global elimination of dog-mediated human rabies lists some conditions that need to exist for a successful rabies control programmes:

Furthermore, in the framework of the Tripartite Alliance, WHO, FAO and OIE are committed to support countries building technical capacity through sharing of expertise. Collaboration between human and animal health sectors through the ‘One Health’ approach is essential to achieve success at national, regional and global levels. WHO and OIE, in collaboration with FAO and with support of GARC are organizing a Conference on the “Global elimination of dog-mediated human rabies: The Time is Now!”, on 10-11 December 2015 at WHO headquarters in Geneva, that will convene key participants from Ministries of Health and Veterinary Services, national rabies coordinators, veterinary and human health experts , NGOs and the private sector.