Home » News » The Directors General of FAO, OIE and WHO united to tackle new challenges

The Directors General of FAO, OIE and WHO united to tackle new challenges 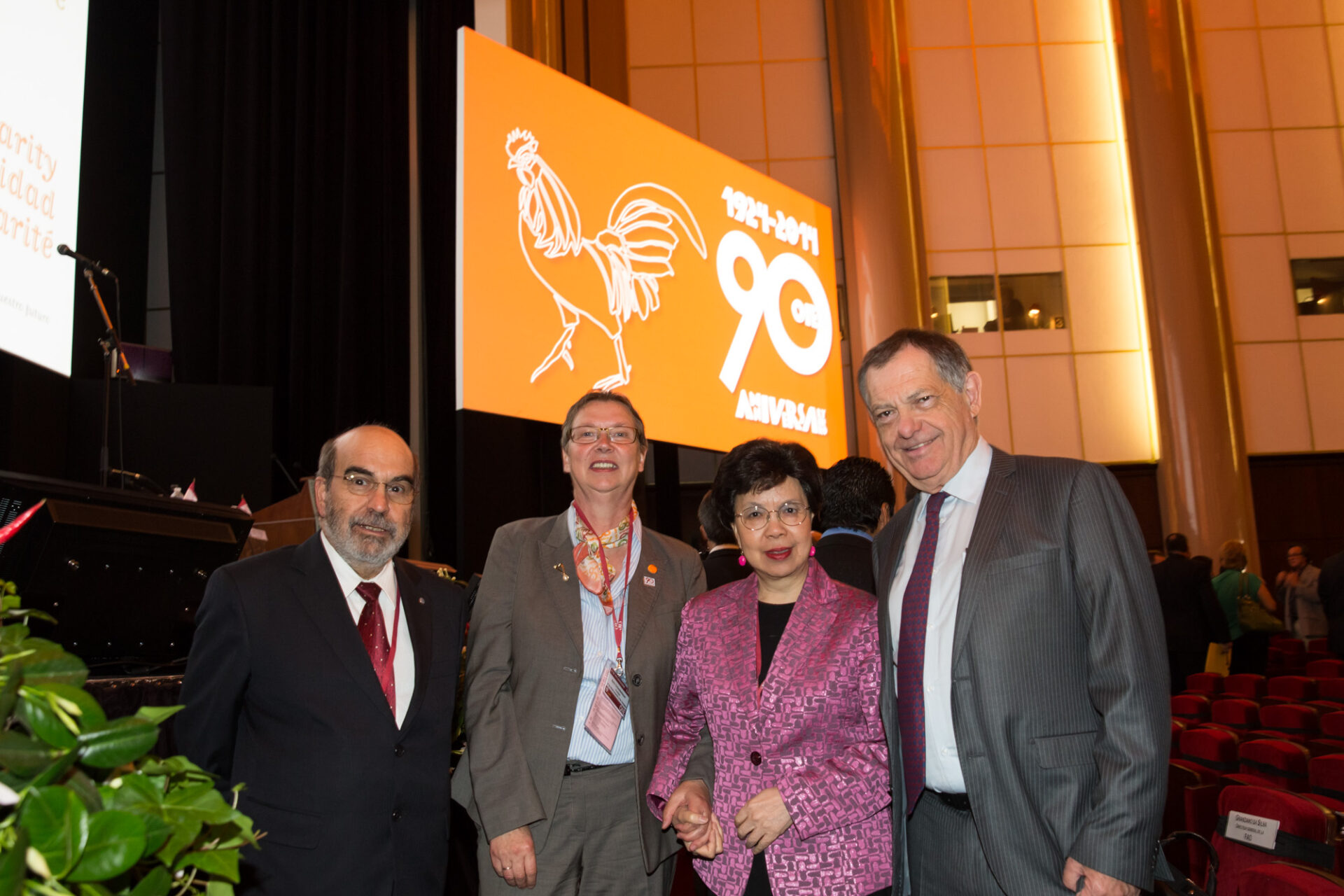 Paris, 25 May 2014 – The President of the World Assembly of Delegates, Dr Karin Schwabenbauer, opened today the works of the 82nd General Session of the OIE at the Maison de la Chimie (Paris) and gave an inaugural address alongside the OIE Director General, Dr Bernard Vallat.
The Ceremony welcomed more than 800 participants, representing Member Countries of the OIE as well as numerous international, intergovernmental, regional and national organisations.

Convinced of the ever-increasing need for intersectorial collaboration to tackle the new challenges linked to the control of diseases at the animal-human-ecosystem interface on a global scale, the Directors General of World Health Organization (WHO) and the Food and Agriculture Organization of the United Nations (FAO) attended the event and gave an address to the Assembly.

‘The WHO strongly supports the strengthening of cooperation between Public Health Services and Veterinary Services. In order to prevent and control diseases at the human-animal interface, as well as to contain the threat of antimicrobial resistance, multisectoral coordination is crucial, not only at the global level but also at the regional and national levels. To this end, WHO and OIE have been working closely together with the support of the World Bank, and in the framework of FAO/WHO/OIE tripartite collaboration’, says Dr Margaret Chan, Director General of the WHO.

‘FAO and OIE have had a proud history of collaborating on a wide range of issues, perhaps most notable of which was the successful global eradication of rinderpest. Today, FAO and OIE are restating this spirit of cooperation and their intentions to continue the fight to keep both animals and humans healthy’, announced Mr José Graziano da Silva, Director General of the FAO.

They were followed by twelve interventions of governmental authorities.
Her Royal Highness Princess Haya, OIE Goodwill Ambassador and about thirty Ministers from OIE Member Countries also honoured the Assembly with their presence.

The Opening Ceremony was accompanied by musical interludes performed by the country music group Stringcaster and by the launch of the new OIE video production on WAHIS, the World Animal Health Information System of the Organisation.

The 82nd General Session of the World Assembly of OIE Delegates will be held from 25 to 30 May 2014.
As in each year, OIE Delegates will discuss and adopt new international standards and guidelines on terrestrial and aquatic animal disease prevention and control, animal welfare, as well as diagnostic methods and vaccine quality. The World Assembly will adopt Resolutions on the base of a democratic vote: one country-one voice, aiming at establishing the policies of the OIE.
Two technical items of general interest, one on African swine fever and the other on official animal disease control programmes, will be presented by Rapporteurs chosen for their international competency.

During this week, the Assembly will examine the worldwide animal health situation, and give special attention to the latest sanitary episodes of importance: the porcine epidemic diarrhoea (PED) in USA, Japan and Canada, the Middle East respiratory syndrome coronavirus (MERS-CoV), the bovine spongiform encephalopathy (BSE) or ‘mad cow disease’ in Brazil, influenza H7N9 and H5N8 in Asia, rabies in wildlife in Chinese Taipei and the African swine fever (ASF) in Eastern Europe.
The latest available information notified by concerned OIE countries regarding these diseases will be discussed with a view to preparing measures to prevent any wider spread of these viruses in animals.
An expert group on PED will gather in a technical meeting to analyse the risks regarding pigs and pork products importation.

Status of many Member Countries with regard to priority diseases will also be considered for official recognition.

Member Countries will discuss and propose a Resolution for global control and eradication of peste des petits ruminants (PPR), a devastating disease of sheep and goats.

The OIE has worked for 90 years to tackle the successive challenges in animal health, thanks to its expertise, transparency, standard-settings and its solidarity. The Opening Ceremony was clotured with a cocktail celebrating this Anniversary honouring 1924 founder Countries and featuring a photo exhibition reminding of the achievements of the OIE since its creation.
More information about the Anniversary on www.90.oie.int.

As in every year, the OIE granted honorary awards to eminent persons for outstanding services to the veterinary community and to the OIE.
The World Veterinary Day Prize 2014, on the theme of animal welfare was presented to the American Veterinary Medical Association (AVMA).

Additional information for the press

During the proceedings of the General Session, journalists are also invited to attend the following sessions: