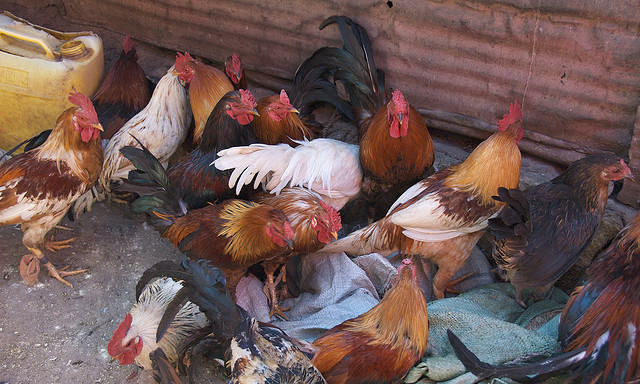 What is Avian Influenza (AI)?

Avian influenza (AI) is a disease of birds, caused by Type “A” influenza viruses which can affect several species of domestic poultry, such as chickens, turkeys, quails, guinea fowl, ducks, etc., as well as pet birds and wild migratory birds and water fowl. Avian influenza viruses have also been isolated, although less frequently, from mammalian species including rats, mice, weasels, ferrets, pigs, cats, tigers, dogs, horses, as well as humans.

There are many strains of AI viruses that can generally be classified into two categories according to the severity of disease in poultry:

The differentiation between low and high pathogenicity avian influenza is based on the results of laboratory tests, which are described in the OIE Diagnostic Manual.

Where has  influenza A (H5N8) been reported?

A highly pathogenic strain of H5N8 was detected earlier this year in Asia in poultry species in the Republic of Korea, Japan and in China.

In January 2014, the authorities of the Republic of Korea reported the first poultry cases of disease due to the infection with a highly pathogenic strain H5N8 of avian influenza viruses (type A). A total of 29 outbreaks were reported in birds involving geese, chickens and ducks. Close to 600,000 birds were culled. In September 2014, the country subsequently reported a new outbreak in ducks reared for meat production where 1200 birds died and 19,800 were culled to control the disease.

In April 2014, Japan notified one outbreak caused by HPAI H5N8 with 1100 cases reported. As a part of the control measures, 112,000 birds were destroyed/culled. . Four months later, in November 2014, another outbreak was notified by Japan when the virus was confirmed from two (2) faecal samples taken from tundra swan (Cygnus columbianus).

China reported the same subtype of avian influenza viruses in October 2014 notifying two outbreaks involving one environmental sample and one duck sample collected as a part of the national surveillance plan.

German authorities confirmed highly pathogenic H5N8, in fattening turkeys in a semi-closed rearing system in Mecklenburg – Vorpommern in early November. One case was detected; all 1,731 susceptible birds present at the farm were destroyed.

Two weeks later, Germany reported that a clinically healthy wild duck, shot in Mecklenburg – Vorpommern, tested positive to HPAI H5N8. Active monitoring of wild birds showed negative results for avian influenza virus with the exception of this duck. The virus was sequenced and reported to be the same as from the outbreak in the turkey farm.
All samples taken from poultry of holdings in the restricted zones and of contact holdings have been investigated with negative results for avian influenza.

In mid-November the veterinary services of The Netherlands detected the virus ona farm of 150,000 layer and breeding hens in Utrecht in a closed breeding system.
Four days later, Netherlands reported two more outbreaks. Cumulatively, more than 200,000 birds have been destroyed in the 3 outbreaks in Netherlands. A 10 km surveillance zone was established immediately which encompassed 26 other poultry premises. Screening birds on these premises has been undertaken.

In mid-November the United Kingdom also detected a highly pathogenic HPAI virus subtype H5N8 in a housed 60-week-old duck breeding flock. Approximately 6,000 birds have been culled. The authorities considered the outbreak closed on the 21/11/2014.

These data are extracted from WAHIS, the OIE World Animal Health Information System.

What is the source of influenza A (H5N8)?

Based on the partial sequence data of the HA gene segment, the German, the Dutch and the British viruses were identified as closely related to the Republic of Korea H5N8 viruses. Investigations are continuing to determine the source of the European outbreaks. The viruses belong to the clade 2.3.4.6.

Have wild birds been identified as a carrier of the influenza A (H5N8) virus?

National authorities are strongly encouraged to raise the awareness and established cooperation mechanism with hunters and other individuals who may come into contact with wild birds in order to provide early information on sick or dead wild birds.

How is influenza A (H5N8) transmitted and spread among birds?

All AI viruses can be transmitted among birds through direct contact with secretions from infected birds, especially faeces or through contaminated feed, water, equipment, and human clothing and shoes.

They are readily transmitted from farm to farm by the movement of domestic live birds, people (especially when shoes and other clothing are contaminated), and contaminated vehicles, equipment, feed, and cages. Highly pathogenic viruses can survive for long periods in the environment, especially when temperatures are low.

Several factors can contribute to the spread of all AI viruses including: the movements of people and goods, marketing practices (live bird markets), farming practices and the presence of the viruses in migratory wild birds.

What are the reporting requirements for influenza A (H5N8)?

As detailed in the OIE Terrestrial Animal Health Code, all cases of highly pathogenic avian influenza (HPAI) found in any domestic or wild bird must be notified to the OIE by the competent authorities (Veterinary Services) in a country.

Low pathogenic avian influenza viruses of subtypes H5 and H7 in poultry are also notifiable to the OIE because, even though they do not cause severe disease, they have the potential to mutate readily into highly pathogenic viruses or to infect other species.

What are the basic requirements for worldwide AI prevention and control in animals?

All countries must maintain the public and private components of Veterinary Services, which comply with OIE standards on quality, including:

Can culling be used as a control measure?

If the infection is detected in animals, generally a culling policy is used in the efforts to control and eradicate the disease.

Requirements include (and are described in the OIE Terrestrial Animal Health Code):

Culling of infected and susceptible domestic birds has been carried out by currently affected countries with respect to highly pathogenic H5N8.

What are the OIE recommendations for trade in poultry from a country infected with influenza A (H5N8)?

The risk analysis to be used by importing countries in order to protect their territory from pathogen introduction is very complex and is based on a long list of OIE standards.

In the case of outbreaks of high pathogenic avian influenza of the H5N8 strain in potential exporting countries, the recommendations for safe trade that apply can be found in the OIE Terrestrial Animal Health Code (Chapter 10.4; 2014). These measures are science-based and should not result in unjustified trade barriers; they include zoning, the testing of the animal populations of origin and processing temperatures for eggs, egg products and poultry meat sufficient to inactivate the virus.

What compensation measures should be applied for the concerned farmers?

Systems for financial compensation of farmers and producers who have lost their animals as a result of mandatory culling requested by national authorities vary around the world; they may not exist at all in some countries. The OIE encourages national authorities to develop and propose compensation schemes because they are a key to early detection and transparency in reporting the occurrence of animal diseases, including avian influenza.

What are the food safety recommendations?

Animals which have been culled as a result of control measures in response to an outbreak of avian influenza, including the A (H5N8) virus, should not enter the food and feed chain as a precautionary and regulatory measure.

There is no evidence to suggest that the consumption of poultry meat or eggs could transmit the AI virus to humans.

What is the public health risk associated with avian influenza?

AI viruses are highly species-specific, but have, on rare occasions, crossed the species barrier to infect humans. This disease should not be confused with seasonal human influenza (flu), a very common human disease (generally caused by human H1 and H3 viruses). Transmission of AI viruses to humans occurs when there is close contact with infected birds or heavily contaminated environments.

Currently there is no evidence of human infection from influenza A(H5N8) virus.

What prevention measures are recommended at the farm level?

It is essential for poultry producers to maintain biosecurity practices to prevent introduction of the virus in their flock: