Home » News » Public health, animal health and security sector must speak with one voice on the need to strengthen health systems

Public health, animal health and security sector must speak with one voice on the need to strengthen health systems

Last month, the OIE global conference on ??biothreat reduction brought together all the key players of the health and security sectors. This 3-day conference focused on enhancing collaboration and on building a consensus for action to strengthen the ability of public and animal health systems to prevent, detect and respond to all biological threats whether they are deliberate, accidental or natural, in particular at the animal source of animal diseases transmissible to humans. The recommendations of this conference have just been published.?????

Paris, 11 August 2015 – All around the world, animal disease agents, including those transmissible to humans, have the potential to escape by accident from laboratories or to be used as biological weapons because of their wide ranging economic, health and social impacts, their low cost and their ready availability. The OIE Global Conference on Biological Threat Reduction, held in collaboration with the World Health Organization (WHO), brought together key actors from international organisations and national governments to agree on priority actions and common messages. The participants who represented the public health, animal health, ecosytem health, and security sectors included educators, policy and decision makers, scientists, security officers, veterinarians and medical doctors.

The conference report and recommendations (endorsed by the participants on Thursday 2 July 2015) are now on line: 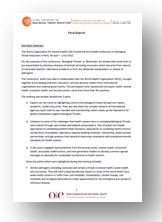 Under-investment in health systems, war or civil unrest, climate change, natural disasters, terrorism and crime were all identified as potential global health threats because they threaten the ability of animal and public health systems to provide the very basic needs. Countries with weak health systems are particularly vulnerable and, in an age when infectious diseases can travel across borders so quickly, this is a threat to the whole international community. Robust well governed animal and human health systems are resilient and provide protection against a spectrum of threats from naturally occurring diseases, to emerging diseases, bioterrorism and laboratory accidents.

A key outcome of the meeting was that good governance of animal and public health national systems allowing early detection and rapid response to any new disease outbreak protects the society and neighbouring countries from potential disasters of natural, accidental or intentional origin.

Following this outcome, the main players at international level agreed that the health and security sectors need to improve cooperation and speak with one voice on the urgent need to invest in strengthening health systems.

The social and economic costs and benefits of investing in health systems in peacetime far outweigh the costs of responding to a crisis linked with a preventable biological disaster. Investments in the systems needed to support these policies should be considered a priority in all countries.

Internationally adopted standards are the basis for global infectious disease prevention and control, including early detection and rapid response to biological events, and for strong animal health and human health systems.

By complying with international standards for health systems, set by the OIE and WHO, countries demonstrate that they stand a good chance of detecting and tackling animal and human health threats.

Because many of our countries are not able to meet these standards the OIE, together with WHO, has established a comprehensive global framework for strengthening in parallel public and animal health systems. “In addition, we have made progress in establishing good governance in the animal sector, as we have already responded to requests for assistance from 133 of our 188 member countries”, stated Dr Bernard Vallat, Director General of the OIE.