Home » News » Protecting the effectiveness of antibiotics: we can all contribute

Protecting the effectiveness of antibiotics: we can all contribute

Monday 16 November 2015 marks the launch of the first World Antibiotic Awareness Week. The purpose of this week is to raise awareness of best practice for using antibiotics to reduce the risks of bacteria becoming resistant to antibiotics and to prolong their effectiveness.

The responsible and prudent use of antibiotics, in both people and animals, is crucial, not only in the interests of human health but also for animal health and animal welfare. To mark this special week, the OIE is making publicly available a dedicated internet portal, along with new posters and infographics, to enable national authorities, veterinarians, breeders and animal owners to take a more effective role in counteracting the major threat to public health posed by antimicrobial resistance. 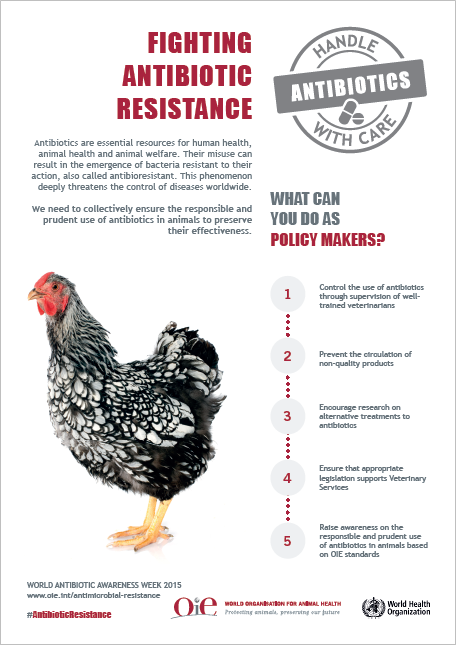 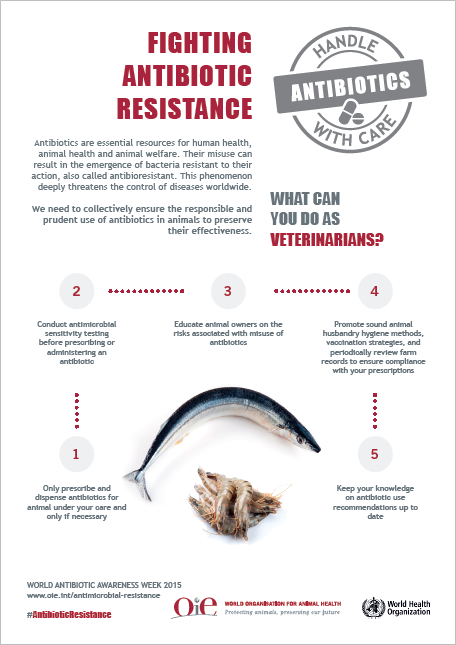 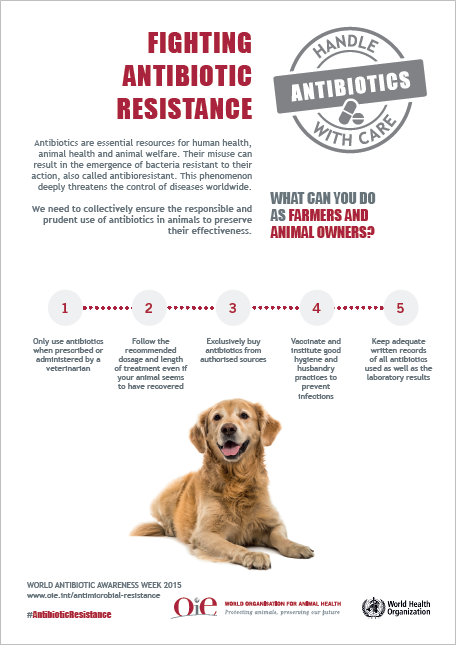 Paris, 13 November 2015 – Antibiotics are essential for treating bacterial diseases. However, their misuse can result in the emergence of bacteria resistant to their action. Today, it only takes a few hours for a bacterium to travel across the planet, and a few minutes more to form a colony of thousands.

With our knowledge that 60% of human pathogens came originally from animals, it is clear that bacteria that are resistant to antibiotics pose a serious threat to the treatment of both animal and human diseases throughout the world.

The first World Antibiotic Awareness Week, taking place from 16 to 22 November 2015, is aimed at alerting the international community to the health risks posed by antibiotic resistance and to promote best practice by all those involved in this area, to limit the emergence and spread of resistant bacteria.

‘Ensuring the responsible and prudent use of antibiotics for animals is essential to protect their effectiveness, not only for animal health and animal welfare but also for human health. This is why we need better controls on the production, registration, importation, distribution and use of antibiotics, as well as good legislation, qualified veterinarians and a well-organised veterinary profession to oversee their use in animals,’ points out Dr Bernard Vallat, Director General of the OIE.

For more than ten years, the OIE has actively worked to promote the appropriate use of antibiotics in animals and has published intergovernmental standards in this field, in close collaboration with its international network of experts. These standards, updated in May 2015, have been adopted by all of the OIE’s 180 Member Countries, which have undertaken to implement them in their own territories. These standards also form the foundation of the OIE’s considerable contribution to the development of the veterinary component of the World Health Organization’s (WHO) Global Action Plan on Antimicrobial Resistance.

So, from today, the OIE is making a number of communication tools freely available, through its new web portal on antimicrobial resistance, to promote best practice for the use of antibiotics in animals. Aimed particularly at those involved in animal health and production, it presents the problems caused by antimicrobial resistance and describes the activities of the OIE and its partners in this area.

To encourage close cooperation between the human and animal health sectors on this topic, posters, available on the OIE portal, were designed in conjunction with WHO and the Food and Agriculture Organization of the United Nations (FAO), under the framework of WHO’s ‘Handle Antibiotics with Care’ campaign.

A detailed infographics explains the essential elements required by each country to ensure the responsible and prudent use of antibiotics within its territory.

By adopting best practice when treating animals with antibiotics, principally through applying the intergovernmental standards of the OIE, we can, collectively, prolong their effectiveness and protect our future.