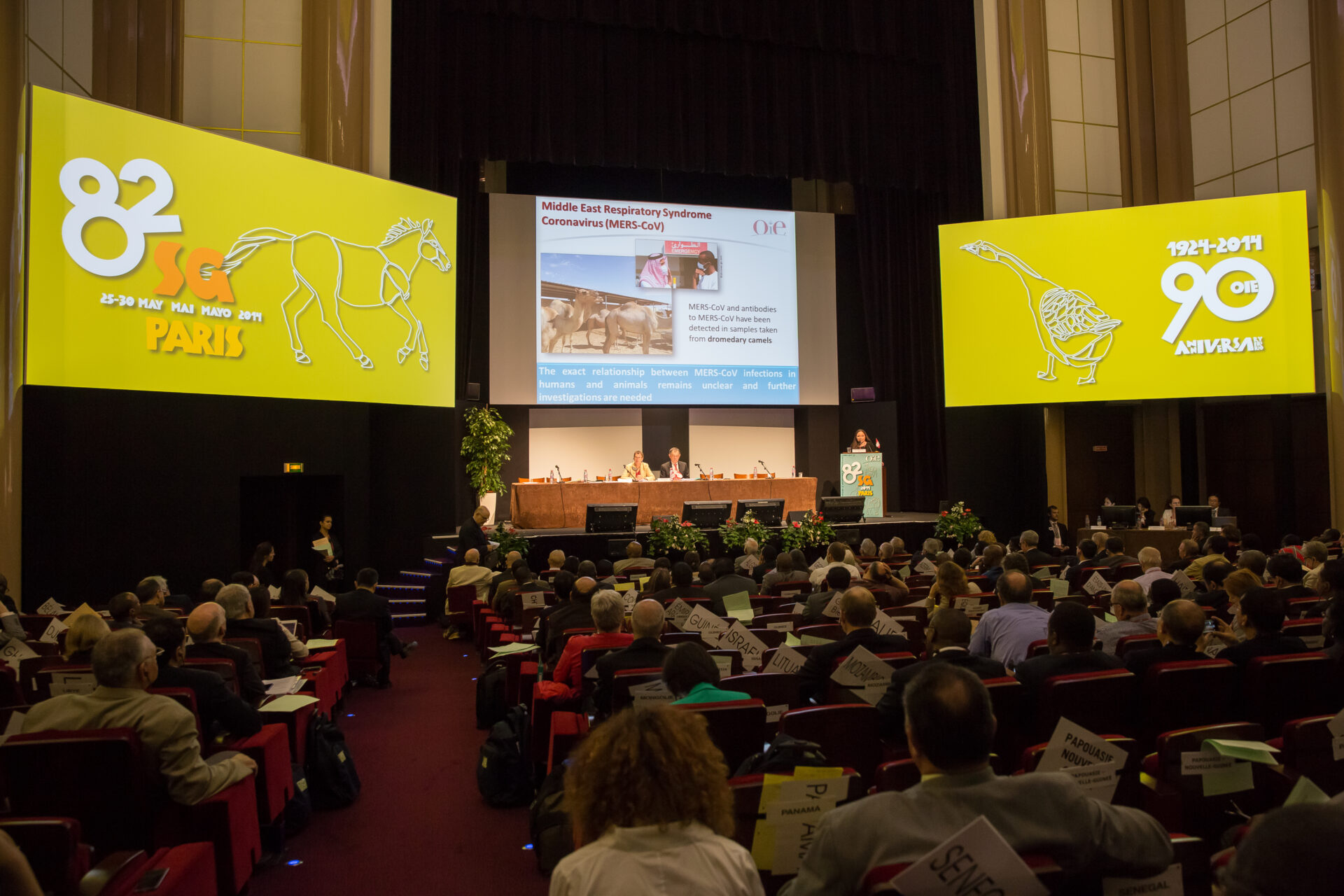 Paris, 30 May 2014 – Over 850 participants, representing Member Countries of the OIE as well as numerous international, intergovernmental, regional and national organisations took part in the 82nd Session of the OIE, which marked the 90th Anniversary of the Organisation.
On this special year, the World Assembly had the honour of welcoming both the Directors General of the World Health Organization (WHO) and the Food and Agriculture Organization of the United Nations (FAO).

‘The gathering of the Directors General of the three major intergovernmental organisations with regard to animal and public health features the ever-increasing need for intersectorial collaboration to tackle the new challenges linked to the control of diseases at the animal-human-ecosystem interface on a global scale’, stated Dr Karin Schwabenbauer, President of the OIE.

Her Royal Highness Princess Haya, OIE Goodwill Ambassador, and around thirty Ministers from OIE Member Countries also honoured the Assembly with their presence.

The World Assembly of OIE Delegates adopted 40 Resolutions on the base of a democratic vote: one country-one voice.

The World Assembly of Delegates approved the application of two new countries: Liberia and South Sudan, raising to 180 the number of OIE Member Countries.
OIE Delegates proceeded to the election of the new Vice-President of the Council, Dr Botlhe Michael Modisane, Delegate of South Africa.

During this week, the Assembly examined the worldwide animal health situation, and gave special attention to the latest sanitary episodes of importance: the porcine epidemic diarrhoea (PED) in some countries of America and Asia, the Middle East respiratory syndrome coronavirus (MERS-CoV), the bovine spongiform encephalopathy (BSE) or ‘mad cow disease’ in Brazil, influenza H7N9 and H5N8 in Asia, rabies in Chinese Taipei and the African swine fever (ASF) in Eastern Europe. The latter was treated in one of the technical items during the OIE General Session.
OIE Member Countries exchanged views regarding PED situation. The OIE Director General decided to set up an ad hoc group on the topic. International experts have been identified and will be gathered to elaborate a technical note and provide a risk analysis regarding international trade of pigs and pork products.

As in each year, OIE Delegates adopted and revised numerous standards and guidelines in the fields of terrestrial and aquatic animal disease prevention and control, as well as diagnostic methods and vaccine quality.

The OIE also pays a continuous attention to animal welfare improvement. The standard adopted in 2013 on animal welfare in broiler chicken production systems was revised (Chapter 7.10.), notably with regards to the deviation of the feed conversion rate, which is an indicator of animal welfare issues (article 7.10.3). Work is currently in progress on standards for dairy cattle and working animals.

For the first time, the World Assembly adopted a standard proposing a concept for international movements of competition horses.
This new standard sets the basis of a framework to facilitate and harmonise the transport conditions of a ‘high health status’ horse subpopulation. Following this, detailed biosecurity guidelines will be developed in the coming years. This is the result of the successful collaboration of the OIE with the Fédération Équestre Internationale (FEI) and the International Federation of Horseracing Authorities (IFHA) which also illustrates the trend of the OIE to develop public-private partnerships.

The three Chapters involving Brucella spp were merged into one single Chapter combining the three pathogens B. abortus, B. melitensis and B. suis, in order to harmonise their control measures.

The Chapter on Infection with African horse sickness virus (Chapter 12.1.) was revised with regard to its compatibility with Official status recognition applications.

In total, the World Assembly adopted the revision of 25 Chapters and the addition of two new Chapters in the OIE terrestrial Code.

In the field of Aquatic animal diseases, the World Assembly adopted among others:

The Delegates were informed that disease-specific guidance documents on ‘Surveillance for viral haemorrhagic septicaemia’ and ‘Surveillance for infection with Bonamia ostreae’ had been uploaded onto the OIE website.

The status of Member Countries with regard to priority diseases have been considered for official recognition. OIE Members can request to be included in the list of countries with a recognised disease status for the following: bovine spongiform encephalopathy (BSE), foot and mouth disease (FMD), contagious bovine pleuropneumonia (CBPP), African horse sickness (AHS), peste des petits ruminants (PPR). In total, 88 national applications were presented to the World Assembly for adoption.
Last year, the World Assembly also added classical swine fever (CSF) to this list: Member Countries will have the possibility to apply from June 2014 onwards.
Members may also, if they wish, apply for official OIE endorsement of their national control programme for FMD, PPR and CBPP.

During this World Assembly:

Towards a world ‘free from PPR’

The world Assembly adopted a Resolution with regard to global PPR control and eradication strategy, which is considered a global public good.

The distribution of PPR has expanded throughout the past ten years and it is now present over a large part of Africa, the Middle East and Asia. Since PPR is a major devastating disease of small ruminants it has been selected as one of the top priority diseases to be addressed by the OIE.
The Global PPR Control Strategy, developed in the framework of GF-TADs (Global Framework for the progressive control of Transboundary Animal Diseases), a joint FAO/OIE initiative, will contribute to poverty alleviation and further develop the global and regional trade in animals and animal products.
The PPR strategy will also include mechanisms of protection of PPR free countries.
In this framework, an Inter-regional Conference ‘Global strategy for PPR’ is planned.
The successful strategy which led to the eradication of rinderpest in 2011, built on long term continuous efforts including global and regional coordination will serve as a model for the PPR eradication programmes.

OIE scientific network and capacity building: enhanced distribution and development of the OIE network of expertise

The OIE expertise network is in constant growth. This year, the Delegates accredited nine new Reference Laboratories and six new Collaborating Centres, bringing the number of official centres of scientific excellence within the OIE worldwide network to 296, in 44 countries over the five continents.

In line with the OIE’s continuous engagement in supporting the capacity-building of the veterinary scientific community and bringing it in compliance with quality standards adopted by the World Assembly, laboratory twinning projects have been set up since 2006. This initiative encourages the exchange of competencies and experience between countries hosting OIE Reference Laboratories and Collaborating Centres and developing countries. To date, 19 twinning projects have been completed, 30 projects are underway and 3 candidate laboratories have already been designated as OIE Reference Centres. Following this initiative, two of the laboratories trained by these twinning programmes were approved as of new OIE Reference Centres in May 2014.
In parallel, the OIE has also been supporting, since 2013, twinning projects among Veterinary Education Establishment and Veterinary Statutory Bodies. Around 20 projects are currently underway or planned to start soon.

All the Resolution of the 82nd General Session of the OIE will be available soon on the OIE website.