Global strategic framework for the elimination of dog-mediated human rabies

Time for action is now!

In accordance with the consensus of the Global Conference held in Geneva on 10-11 December 2015, the World Organisation for Animal Health (OIE) and the World Health Organization (WHO) are releasing their global framework for the elimination of dog-mediated human rabies, in collaboration with the Food and Agriculture Organization of the United Nations (FAO) and with the support of the Global Alliance for Rabies Control (GARC).

This document concludes the conference report and provides a coordinated approach and vision for the global elimination of the disease. It is intended to harmonise actions worldwide and provide adaptable, achievable guidance for countries and regions to reach zero human deaths from dog-mediated rabies by 2030 in participating countries.

Paris, 16 March 2016 – Dog-mediated human rabies still kills tens of thousands of people every year in the world. Freedom from this plague is a global public good and is feasible with currently available tools.

The new framework, which results from the fruitful discussions engaged among nearly 300 participants – including experts, donors, as well as veterinary and public health officials – during the WHO/OIE Conference on rabies, last December, identifies actions needed to achieve effective rabies elimination and promises to be a milestone in its success.

“Rabies is 100% preventable through vaccination and timely immunization after exposure, but access to post bite treatment is expensive and is not affordable in many Asian and African countries. If we follow this more comprehensive approach, we can consign rabies to the history books,” said Dr Margaret Chan, WHO Director-General, during the Conference.

“The vaccinated dog is the soldier in the fight against rabies”

Knowing that more than 95 % of human rabies cases are caused by dog bites, the most cost-effective way to eliminate rabies is to prevent it at its animal source. Sustainable vaccination of 70% of the at-risk dog population is recognised as the key to eliminate the disease in endemic areas.

In this context, the action plan encourages the promotion of responsible dog ownership and dog population management practices, including dog vaccination, in accordance with OIE intergovernmental standards. 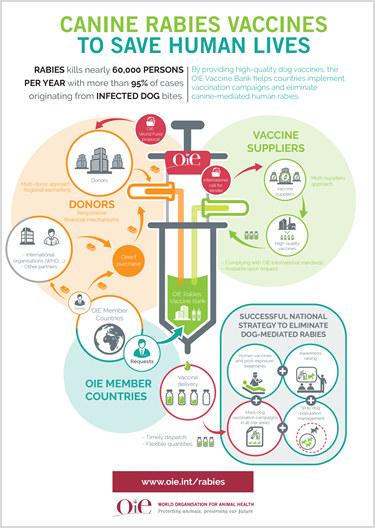 It also reaffirms the need to strengthen animal health and public health systems, so as to ensure sustainable, safe, efficacious and accessible dog and human vaccines and immunoglobulins, and promote and implement mass dog vaccination as the most cost-effective intervention to achieve dog-mediated human rabies elimination.

To this aim, ensuring sufficient supply of quality-assured canine rabies vaccines is essential. This is the reason why, the OIE has created a model of dog vaccine bank since 2012, that guarantees the availability of high-quality vaccines complying with its intergovernmental Standards as well as their rapid delivery on the ground and an adequate price obtained after a global competition between potential providers. This model has already supported the success of several dog vaccination campaigns in some of its Member Countries of Africa and Asia.

As of today, more than 15 million doses of canine rabies vaccines have been ordered or delivered in many countries through the OIE Vaccine Bank.

“The case of rabies in The Philippines is an example of a success story. They deployed a very important programme to combat human rabies, with the support of the WHO. And recently WHO sought for OIE’s help to handle the dog vaccination campaigns in particular through the provision of canine vaccines. This is a great example of institutional collaboration involving the teams which organise vaccine campaigns at national level and international organisations. This kind of collaboration is very interesting, because it does not only involve the creation of common tools, but also the implementation of real practical action in the field,” analyses Dr Monique Eloit, OIE Director General.

Moreover, the framework calls for coordinated activities targeting dog and human populations by adapting proven control strategies. It promotes the One Health approach and intersectoral coordination through national and regional networks.

To support the implementation of these strategies, it is crucial that the international community invests in dog-mediated human rabies elimination. Consequently, WHO, OIE, FAO and GARC have jointly published a Rationale for investing in dog-mediated human rabies, aimed at persuading countries, policy makers and donors of the feasibility, merit and value of investing in rabies elimination strategies.

All participants and other interested parties consider the global framework as refined and adopted at the conclusion of the Conference as the most effective means to achieve the elimination of dog mediated human rabies for participating countries by 2030. Time for action is now!