Today in Sofia, Bulgaria, high level representatives, including The European Commissioner for Health and Food Safety Vytenis Andriukaitis, the OIE Director General Dr Monique Eloit and five Agriculture Ministers1 of the Balkan countries, joined the opening of the Standing Group of Experts on African swine fever (ASF) in Europe organized by the World Organisation for Animal Health (OIE), and the Food and Agriculture Organization of the United Nations (FAO). This mobilisation is a strong signal of support for the work done by veterinary experts to find adequate solutions to stop the spread of ASF in the European region. 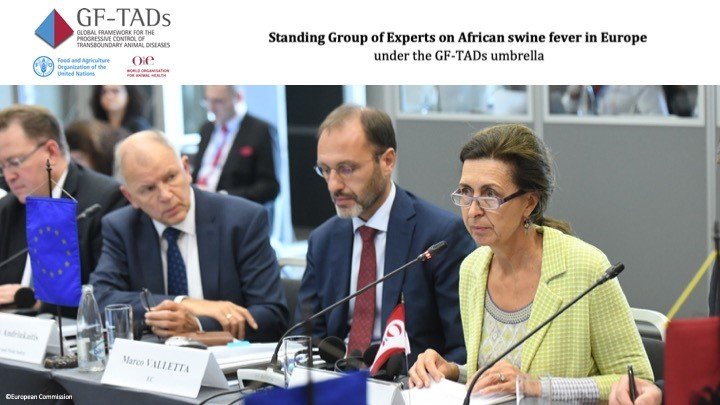 Paris – 10 September 2019: The fourteenth meeting of the Standing Group of Experts on African swine fever in Europe (SGE ASF14) was opened this morning in Sofia, Bulgaria.

The impact of the current global ASF crisis is a major concern to the swine industry, putting the livelihood of many smallholders at stake and destabilizing the global market of pork products. In the OIE Europe region2  the ASF virus was introduced to Georgia in 2007 and spread northwards through Russia, Ukraine and Belarus, then reached the European Union territory – Lithuania – in January 2014, quickly followed the same year by Poland, Latvia and Estonia, before hitting Moldavia in 2016. The most recent appearance of the disease started in 2017 with an active spread mainly southwards reaching the Czech Republic, Romania, Hungary, and Bulgaria. The virus was unexpectedly discovered in Belgium in 2018, then in Slovakia and finally in Serbia in August 2019.3

This latest event in Serbia is of great concern for veterinary scientists and officials: there is now a high risk that the virus will spread to the whole Balkan sub-region. Hence the decision of the president of the GF-TADs for Europe to add a VIP session with ministers of the Balkans during the meeting of the SGE ASF14.

“The recent spread of the virus in South East Europe constitutes a serious threat to the Balkan countries and territories”, highlighted Commissioner Andriukaitis this morning, “and should trigger immediate action at national level to significantly raise the level of awareness on African Swine Fever and to address the situation. Priority actions with neighbouring countries should also be defined in a collaborative manner, preparedness being key for the control of this disease.”

Through the countries’ declarations in to the World Animal Health Information System of the OIE (WAHIS), it is estimated that ASF is currently present in more than 45 countries and territories in the world. During the last two weeks of August, 18 countries and territories notified new or ongoing outbreaks in WAHIS, including 11 in Europe (Belgium, Bulgaria, Hungary, Latvia, Moldova, Poland, Romania, Russia, Serbia, Slovakia and Ukraine).

In Europe, experts describe two main patterns: in some parts of the region (mainly north and west) the disease is predominantly found in the wild boar populations, sometimes with a total absence of outbreaks in domestic pigs, whereas in the rest of the affected countries, its main progression occurs in the domestic pig sector, with the majority in backyard farming.

Another lesson learnt from the past years’ experience is the capacity of the virus to jump over long distances and appear in places where it was not expected, e.g. in the Czech Republic in June 2017, more than 500 km away from the closest affected zones (Poland and Ukraine); or in Belgium in August 2018, approximately 1000 km from the nearest infected area in Poland.

“To stop the spread of such disease for which we do not have vaccine, coordination, collaboration and experience sharing between all stakeholders are essential, at national level but also regional and international level”, explained Dr Monique Eloit, OIE Director General. “the control is possible when everyone applies and respects the rules so that the disease does not become endemic, as demonstrated by the success of Czech Republic and Belgium”.

The Standing Group of Experts on ASF in Europe, which is part of the FAO/OIE initiative called “GF-TADs” for Global Framework for the Progressive Control of Transboundary Animal Diseases, gathers regional and international experts to exchange scientific information and experiences on ASF.

During the two-day meeting, around 90 participants will exchange on the latest scientific evidence and field experiences about the disease, its epidemiology and how to better collect and share information to stop its spread.

Created in September 2014, this Standing Group has over time become a model for other regions. A similar group was created in Asia in April 20194  to face the rapid development of the disease in the Asia Pacific region which hosts more than 60% of the global swine population. Finally, a new Standing Group of Experts on ASF will be launched next week in the Americas region5. The objective is to strengthen the collaboration between countries in the region to prevent the entry of the virus to the Americas region which is still free from ASF.

3 Maps and animations are available at https://web.oie.int/RR-Europe/eng/Regprog/en_ASF_depository.htm#ASFsituation