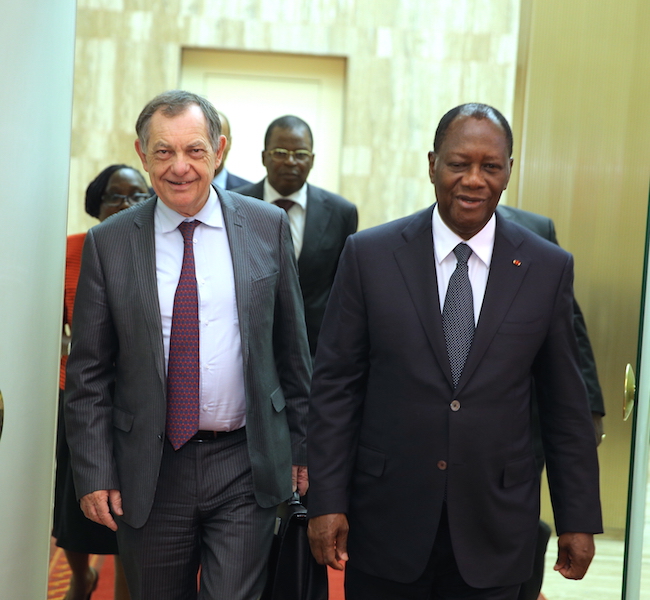 Paris, 17 April 2015 – At the close of the FAO/OIE international conference for the control and eradication of peste des petits ruminants (PPR) in Abidjan (Côte d’Ivoire) on Friday, 3 April 2015, Dr Bernard Vallat, Director General of the World Organisation for Animal Health, had the honour of being received by His Excellency Mr Alassane OUATTARA, President of the Republic, at the Presidential Palace.

This meeting allowed them to congratulate one another on the success of the conference and the launch of the global strategy for the control and eradication of PPR, a devastating disease affecting goats and sheep, with very serious economic repercussions for poor farmers. Côte d’Ivoire, which hosted the event, is the country where the disease was first diagnosed in 1941, as well as being an OIE Member Country that has participated in the Organisation’s activities since it was established.

"With more than 300 participants from every continent, this event, hosted by Côte d’Ivoire, met with the anticipated success. The resulting recommendations mark the first steps in an animal health programme of crucial interest to poor farmers worldwide. The programme will be implemented by the OIE and FAO together with regional and national partners," said Dr Vallat.

The meeting with the President of the Republic provided Dr Vallat with an opportunity to reiterate the OIE’s commitment to guiding and supporting Côte d’Ivoire in the development and enhancement of its activities and its veterinary public health and animal health protection systems, for both terrestrial and aquatic animals.