Home » News » An overview of the OIE’s standards on animal welfare: a new interactive Infographic

An overview of the OIE’s standards on animal welfare: a new interactive Infographic

Recent decades have seen a growing concern in society about animal welfare and this has become a priority area in the work of the OIE. The first OIE intergovernmental standards on animal welfare were published in 2005 and they now cover a broad range of topics. This new infographic is a useful tool to find out about them and easily access the relevant texts adopted by consensus by all 180 OIE Member Countries. 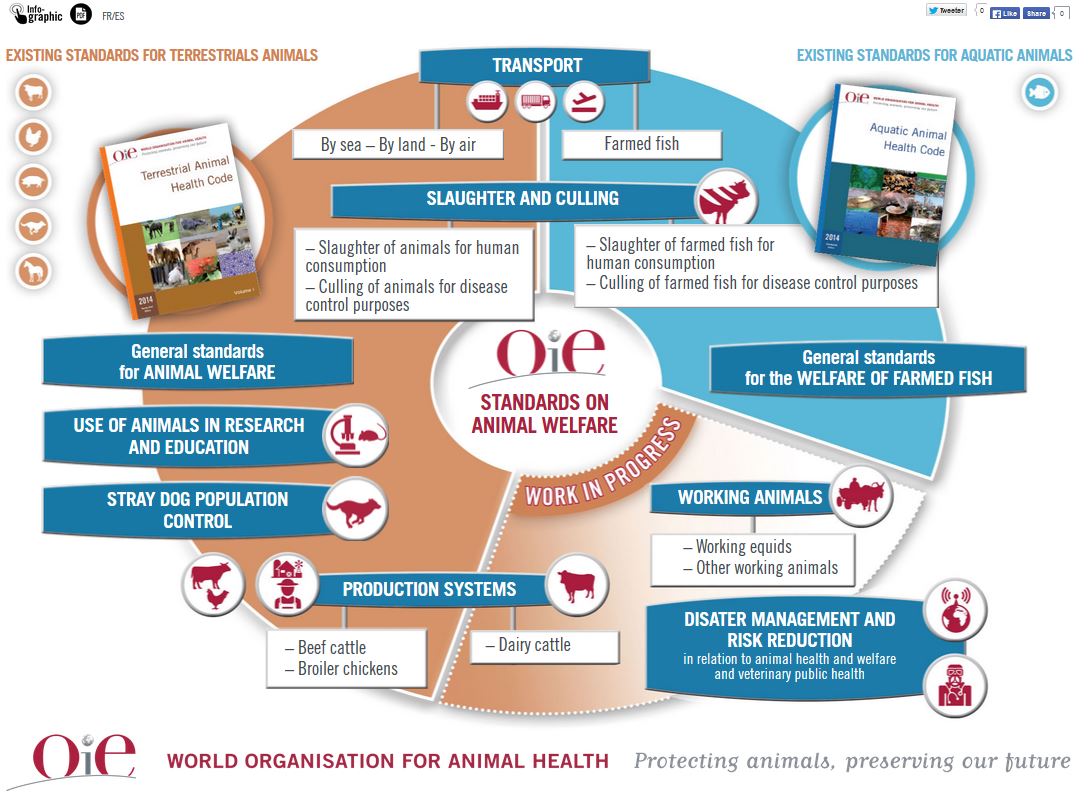 Click on the image to view the infographic full screen

Paris, 20 May 2015 – Animal welfare is a complex and multifaceted issue, with scientific, ethical, economic, cultural, social, religious and political dimensions. Animal production systems and the transport and slaughter of animals are examples of situations where the perception of animal welfare differs from one region and culture to another and from one person to another.

In the early 2000’s, in the absence of any global regulatory framework for this critical issue, the OIE’s Member Countries mandated the Organisation to take the lead on animal welfare worldwide and to elaborate science-based standards in this field for adoption by its Member Countries.

To date, these standards cover the welfare of terrestrial and aquatic animals in key areas, such as production, transport and slaughter, and laboratory animals, and they are updated every year. All 180 OIE Member Countries undertake to promote them at national level, regardless of their cultural practices or economic situation.

This new infographic illustrates all of the topics covered, as published in the Terrestrial and Aquatic Codes, as well as the areas of work currently in progress with a view to propose new standards for adoption. All the texts that have already been adopted are accessible through hyperlinks.