Last Saturday, the 74 Ministers’ delegations participating in the 11th Global Forum for Food and Agriculture (GFFA), to debate digitalisation and smart solutions for future farming, expressed their support to the on-going renovation of the World Animal Health Information System, OIE-WAHIS, acknowledging its key contribution to a more sustainable, responsible and efficient livestock production. They also entrusted the OIE to pursue the implementation of global digital structures promoting an enhanced exchange of information, thereby contributing to strengthen the cross-border fight against animal diseases. 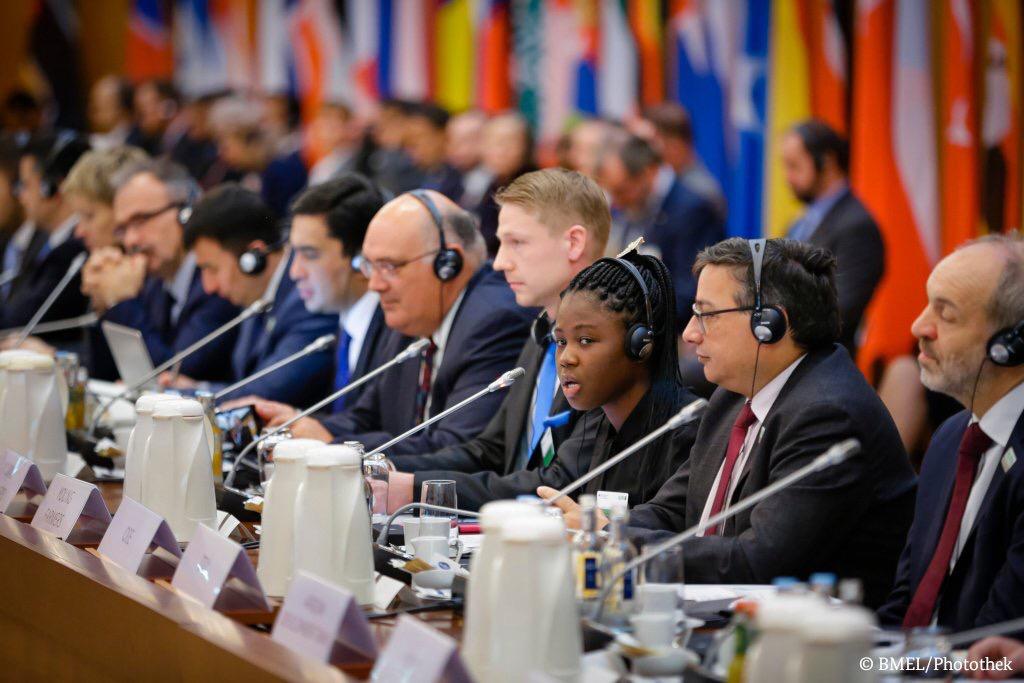 Paris, 21 January 2019 – As we enter 2019, the spread of the epizootics of African swine fever (ASF) is an example of the various sanitary concerns with which Veterinary Services and animal health experts have to deal. When confronted with a disease that has such a serious socio-economic impact on countries, especially on the livelihood of pig farmers, the ability to quickly assess the evolution of the situation is key to stem its spread. In this regard, efficient management and control of the disease requires that countries share transparent information about their animal health situation so that it can be made available to the international community in a timely manner.

In view of facilitating the collection and reporting of data, the OIE is currently upgrading the internet-based World Animal Health Information System, OIE-WAHIS, with advanced technologies.

The benefits brought by such a tool were highlighted at the Ministers’ conference convened on Saturday 19 January 2019 in the framework of the Global Forum for Food and Agriculture in Berlin, Germany, on the theme "Agriculture Goes Digital – Smart Solutions for Future Farming”. The latter adressed how digitalisation can be leveraged to make agriculture more efficient and more sustainable, and therefore contribute to meet the goals of the 2030 Agenda for Sustainable Development.

Today, hundreds of millions of people still depend on their livestock for income and access to food, directly linking animal production sustainability to their livelihood. Yet, experts estimate that around 20% of production losses worldwide can be attributed to animal diseases. As highlighted in last year’s conference, the existence of resilient animal health systems that allow prevention and control of animal diseases, is consequently more essential than ever to protect food safety and security, as well as human health, the economy and social well-being of populations. In this regard, transparency of epidemiological information on the emergence, re-emergence and evolution of animal diseases is crucial. It also allows to build trust between partners and facilitates the safe trade of animals and animal products.

As stated in the Ministers communiqué, “Digitalization in agriculture will play an important role in achieving these goals.” The 74 Ministers attending the conference called for the development of digital systems which improve data use and accessibility, through interoperability, harmonisation and improved geo-localisation.

In the interest of livestock farming, the Ministers strongly recognised OIE-WAHIS as “an important component for exchanging information and for supporting Veterinary Services in designing their animal-disease control programmes”. The above-mentioned features will be included in the renovated OIE-WAHIS interface, which will also allow for data to be viewed, analysed and extracted more rapidly and information on animal diseases to be displayed on dynamic maps.

The renovated OIE-WAHIS will contribute to the proper implementation of global strategies for the control of animal diseases, such as the joint OIE and FAO strategies for the eradication of Peste des Petits Ruminants (PPR) and foot-and-mouth disease, as well as the joint OIE, WHO and FAO action plan on eradicating dog-mediated rabies. Moreover, it will provide information on the circulation of more than 120 animal diseases reported by around 200 countries. The data will be actively disseminated to the current 12,000 subscribers and accessible to everyone. A modern Geographical Information System and a powerful Business Intelligence tool will also be available to facilitate data visualisation, extraction and analysis.

Yet, innovation in the digital strategy of the OIE goes beyond the upgrade of OIE-WAHIS. During a preliminary workshop called “Sustainable livestock goes digital”, Dr Jean-Philippe Dop, OIE Deputy Director General presented a wider overview of current developments undertaken by the OIE to improve the access to information in other fields.

To give an example, in 2015, the OIE initiated a global database on antimicrobials intended for use in animals. The 3rd global report of this database gathers information from 155 countries, representing an increase of responding countries of 19 % since the publication of the first repost. The outcomes and conclusions will be made public mid-February on the OIE website.

Antimicrobial resistance represents a crucial common concern for several sectors involved in global health and the Ministers recognised the benefits of digitalisation as a way to reduce the use of antimicrobial agents in animal husbandry.

Lastly, in future steps, the Ministers called for establishing an independent, international Digital Council for Food and Agriculture under the auspices of the United Nations that will advise governments and other relevant actors, drive the exchange of ideas and experiences, and that will consequently help everyone harness the opportunities presented by digitalisation. This will be done in consultation with stakeholders which will include the OIE as leader on animal health and welfare issues.

The Global Forum for Food and Agriculture (GFFA) is an international conference that focuses on central questions regarding the future of the global agri-food industry. It is held during International Green Week (IGW). The forum gives representatives from the worlds of politics, business, science and civil society an opportunity to share ideas and enhance understanding on a selected topic of current agricultural policy. The GFFA is organised by the Federal Ministry of Food, Agriculture and Consumer Protection (BMEL) in cooperation with GFFA Berlin e.V., the Senate of Berlin and Messe Berlin GmbH.