Marrakesh, 29 October 2018 – Today, political leaders in animal health from around the world met to discuss national action plans aimed at controlling the use of antimicrobials in order to address the global rise of antimicrobial resistance (AMR) in the animal farming sector. These discussions were part of the 2nd Global Conference on Antimicrobial Resistance and Prudent Use of Antimicrobial Agents in Animals, organised by the World Organisation for Animal Health (OIE).

Antimicrobials are essential to control and treat infections in animals and humans, but they are losing their efficacy because they are not being used prudently and responsibly. The increasing movement of people, animals and goods across international borders enables resistant microbes to colonise the planet with ease, which impacts the future of food safety and security, animal health and human health.

Speaking in front of official representatives from OIE’s 182 Member Countries, the ministerial panel – which included Ministers and Vice Ministers from Germany, Japan, Norway, Thailand, Botswana, Senegal, Serbia and Uzbekistan – spoke openly about their own countries’ challenges and successes, as well as the particular issues faced by developing countries. 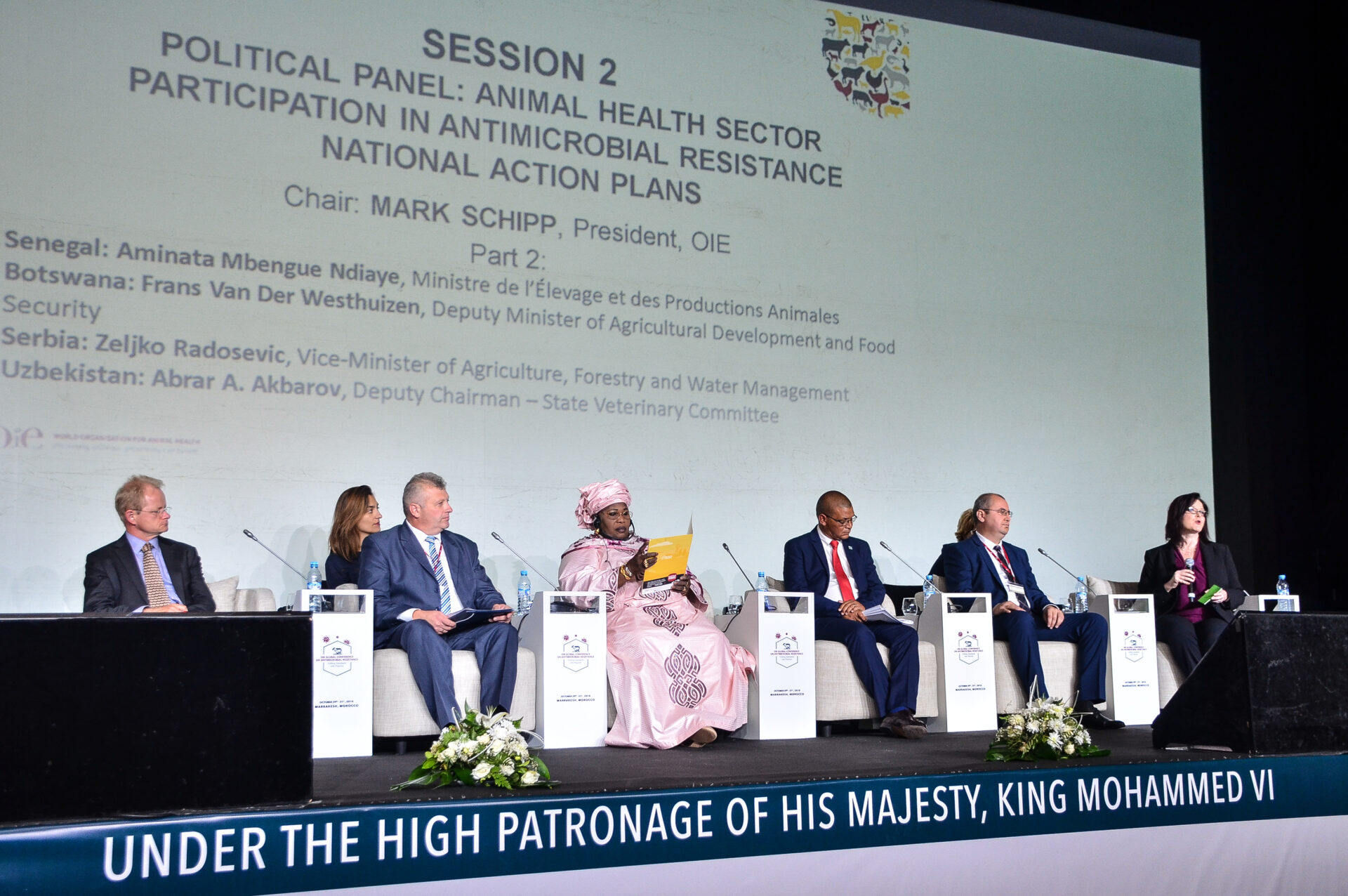 “Farming represents 35% of Morocco’s GDP, so we are committed to tackling this issue both locally and nationally” said Aziz Akhannouch, Minister of Agriculture, Seafishing, Country Development, Waters and Forests of Morocco. “This is an issue which transcends human and animal health, and we are proud that OIE has recognized the success of our strategy to promote animal health, control disease and stop the spread of AMR.”

Also speaking on the panel, Hanne Maren Blåfjelldal, State Secretary at the Ministry of Agriculture and Food in Norway said, “Norway is a world leader in animal health, and this stems from good cooperation between our government, responsible veterinarians, and a competent, engaged livestock sector. We are committed to using our own experience in preventing the spread of antimicrobial resistance to help other countries work towards minimise this threat in their own farming sectors.”

“Japan has been contributing to the development of the OIE Standards as standards based on scientific evidence and on considerations of feasibility in various Member Countries following thorough consultation. This we highly appreciate”, said Susumu Hamamura, Parliamentary Vice-Minister for Agriculture, Forestry and Fisheries of Japan.

“OIE standards were a good basis to Germany in developing our national strategy, and to date the strategy appears to be working,” said Julia Klöckner, Germany’s Federal Minister for Food, Agriculture and Consumer Protection. “Transparency is key, and demonstrates to farmers, scientists and all sectors that their actions are being taken seriously, and being used to improve animal and public health.”

According to the most recent data collected by OIE, as of 2015, 64 countries had regulations in place against the use of antimicrobials for use in growth promotion. There is an international consensus that such use should be phased out, and countries should immediately restrict use for growth promotion purposes of those antibiotics that are listed by the WHO as Highest Priority Critically Important Antibiotics for human medicine.

“We want to help all of our Member Countries to improve their ability to implement the OIE International Standards.” Said Matthew Stone, Deputy Director General of the OIE. “Through the OIE Database on Usage of Antimicrobial Agents, the OIE builds national capacity – amongst all countries – to collect data and track antimicrobial use in animal health. This is a key indicator of our progress in preventing the development of AMR.”

Dame Sally Davies, Co-convener, United Nations Interagency Coordination Group on AMR added, “When it comes to AMR, there should be no apportioning of blame. It is our shared problem and we don’t expect a country to reach perfection overnight. That is why the OIE is leading the adoption of a gradual approach, whereby the phasing out of the use of antimicrobials as growth promoters is simultaneously supported by the promotion of better animal husbandry practices.”

Notes to Editor:
The OIE is the intergovernmental organisation responsible for improving animal health worldwide. The international Standards developed by the OIE and adopted by its 182 Member Countries are recognised by the World Trade Organization (WTO) as the reference for animal health.