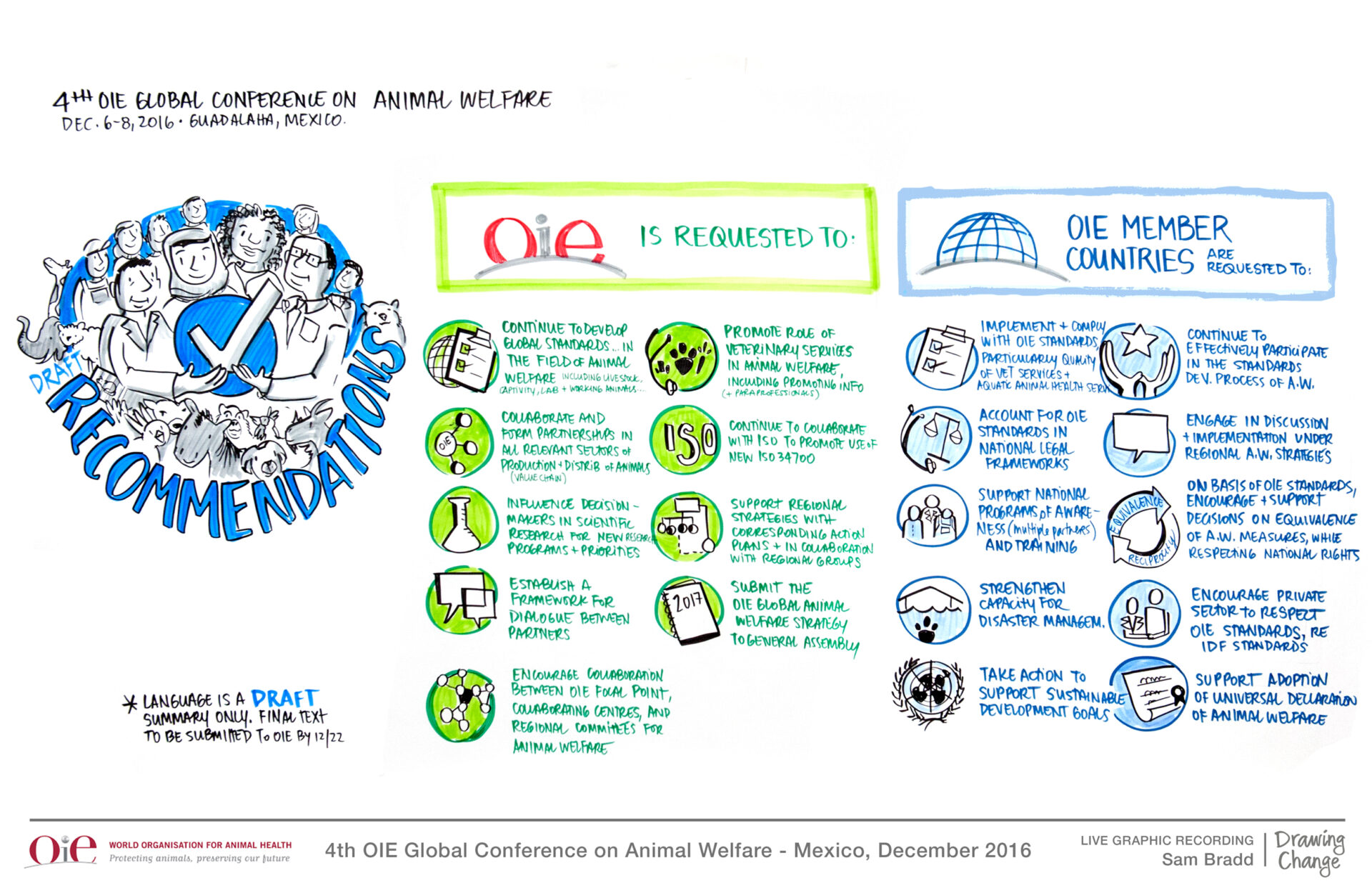 The recommendations adopted by all participants of the Conference as well as the draft OIE strategy on animal welfare will be proposed for adoption by the 180 OIE Member Countries during the 85th OIE General Session in May 2017.

Paris, 12 December 2016 – Hosted by the Government of Mexico*, the Conference addressed a number of relevant topics, chiefly the importance of developing partnerships to encourage the effective implementation of OIE animal welfare standards by Member Countries, the future development of animal welfare science, including the emerging technologies used for their assessment and the preparedness to face natural and man-made disasters in relation to animal health, animal welfare and veterinary public health.

A more detailed overview of the themes covered during the conference can be accessed in the slideshow hereunder.

“At a time when environmental issues are becoming crucial, there is a growing awareness that animal welfare is consistent with sustainable livestock development, and this will undoubtedly contribute to the development of new, more animal-friendly practices”, highlighted Dr Monique Éloit, OIE Director General at the Opening of the Conference.

“Today, the real challenge is to guarantee the animal production food safety by enhancing the synergies that allow us to control the animal diseases which endanger the public health and are a threat to other countries with commercial relations”, explained the representative of the Mexican Food Secretary, José Eduardo Calzada Rovirosa. “The only way to guarantee animal health is through the protection of animal life, health and welfare, and this will result in a positive impact on human health.

Animal welfare has been one of the priority topics of the OIE for the last fifteen years, and is part of its mandate, through which the OIE elaborates science-based standards, recognised by the international community as reference in this field.

A new stage has been reached today: the participants have endorsed the basis of a future OIE global strategy on animal welfare, built on experiences and outcomes of regional strategies already implemented across the world. Its vision is to reach “A world where the welfare of animals is respected, promoted and advanced, in ways that complement the pursuit of animal health, human well-being, socio-economic development and environmental sustainability.”

This strategy is based on the following four elements:

The strategy proposes, in particular, the establishment of a new forum which will bring together members of the animal welfare research community, the global animal welfare movement and the global animal-source food sector. This forum will seek to establish a framework for deepened dialogue between all stakeholders involved in this field, to ensure ongoing support and commitment for the elaboration of new standards.

The OIE is expected to further publish global standards, based on both science and practical experience, notably for livestock production systems and working animals.

As key players in animal welfare issues, Veterinary Services (including public and private sector veterinarians) need to have the accurate capacities. The OIE has described their responsibilities in both the Terrestrial and Aquatic Codes and included appropriate references for their coverage in veterinary education and in the OIE PVS Tool (Performance of Veterinary Services).

Ensuring the welfare of animals is a responsibility that must be shared between numerous stakeholders. Mutual recognition and constructive engagement among parties are necessary to achieve sustained improvements to animal welfare. Member Countries are therefore highly encouraged to support the development of national programmes for raising awareness of animal welfare and educating key players, particularly livestock owners, animal handlers, religious and community leaders and other key groups, such as school students.

The progressive implementation of OIE standards on animal welfare will support the capacities of Member Countries to achieve some sustainability developments goals. Therefore, following the conference, Member Countries are urged to integrate OIE standards in their national legislations, so as to effectively integrate the sixteen existing standards on animal welfare in their national action plans.

Lastly this conference welcomed the publication of the newly adopted ISO[1] Technical Specification on Animal welfare management and the general requirements and guidance for organisations in the food supply chain, consistent with existing OIE animal welfare standards.

The texts of the strategy and the recommendations will be submitted to the World Assembly of Delegates for adoption at the 2017 General Session.

*The OIE would like to congratulate and express its gratitude to the Government of Mexico, the Secretariat of Agriculture, Livestock, Rural Development, Fisheries and Food (SAGARPA), the Government of the State of Jalisco for their generosity and hospitality; with special thanks to the National Service of Animal and Plant Health, Quality and Food Safety (SENASICA) for its contribution, support and collaboration towards the organisation of the conference.